While Rexxfield CEO Michael Roberts was visiting Australia, he was asked to join a US-Based, multi-agency, national manhunt for murder fugitive Dinkue Brown, who had been evading police in connection with the murder of Luis R. Rodriguez, 26, who was murdered on June 21, 2013. The suspect had been on the run for 2 months prior to Michael joining the investigation. 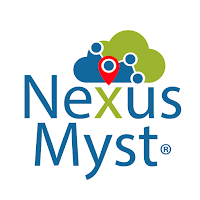 From his temporary office in Brisbane Australia, Michael was able to trick the fugitive  the fugitive into revealing his exact location in Indiana. This took only 73 minutes using Rexxfield’s proprietary digital tripwire system. This subsequently led to the fugitive's arrest by US Marshals.

Roberts said that “Brown had been using sophisticated internet proxy servers to obfuscate his location and communications with family and friends. Rexxfield’s system was able to circumvent Brown’s safeguards, which included disposable single-use cell phone SIM cards”. Brown was located in Indiana and subsequently arrested along with two individuals individuals who were harboring him.
Mr. Roberts stated that his team “has a long history of offering pro-bono investigative support for law enforcement globally, particularly for unsolved violent crimes in which modern communication mediums can hold the clues to solving the cases”.
Michael also secured the release of a father who had been incarcerated for twelve-days, without bail for allegedly sending electronic death threats. As part of a sting operation initiated by Michael at the request of the inmate's mother, Michael was able to prove that the death threats were in fact transmitted by the alleged victim, to herself, in order to frame the jailed man.
Rexxfield spokeswoman, Jasmin Chan, said “His record time for identifying a perpetrator was 17-minutes, it was a case where an Attorney General in the USA had already spent $ 100,000 of tax-payer’s money, with a grand jury and five attorneys, in futile attempts to identify a rogue Tweeter”. She also said that “victims helped by Roberts include school children, celebrities, CEOs and even Heads of State”.

Posted by Michael Roberts Internet Libel Litigation Consultant at 9:14 AM No comments:

Our new project "Page1.me" Has been successful removing ripoff report from page 1 of Google in 91% of the cases so far!

If you're struggling with RipOffReport.com, or any other defamatory content, that is appearing on page 1 of Google search results for your personal name or business name. You might want to try a new project Page1.me

Below is a screenshot of actual client cases from August 2014, the graph speak for themselves,  each graph represents a negative search results on its downward slide from page 1 of Google. 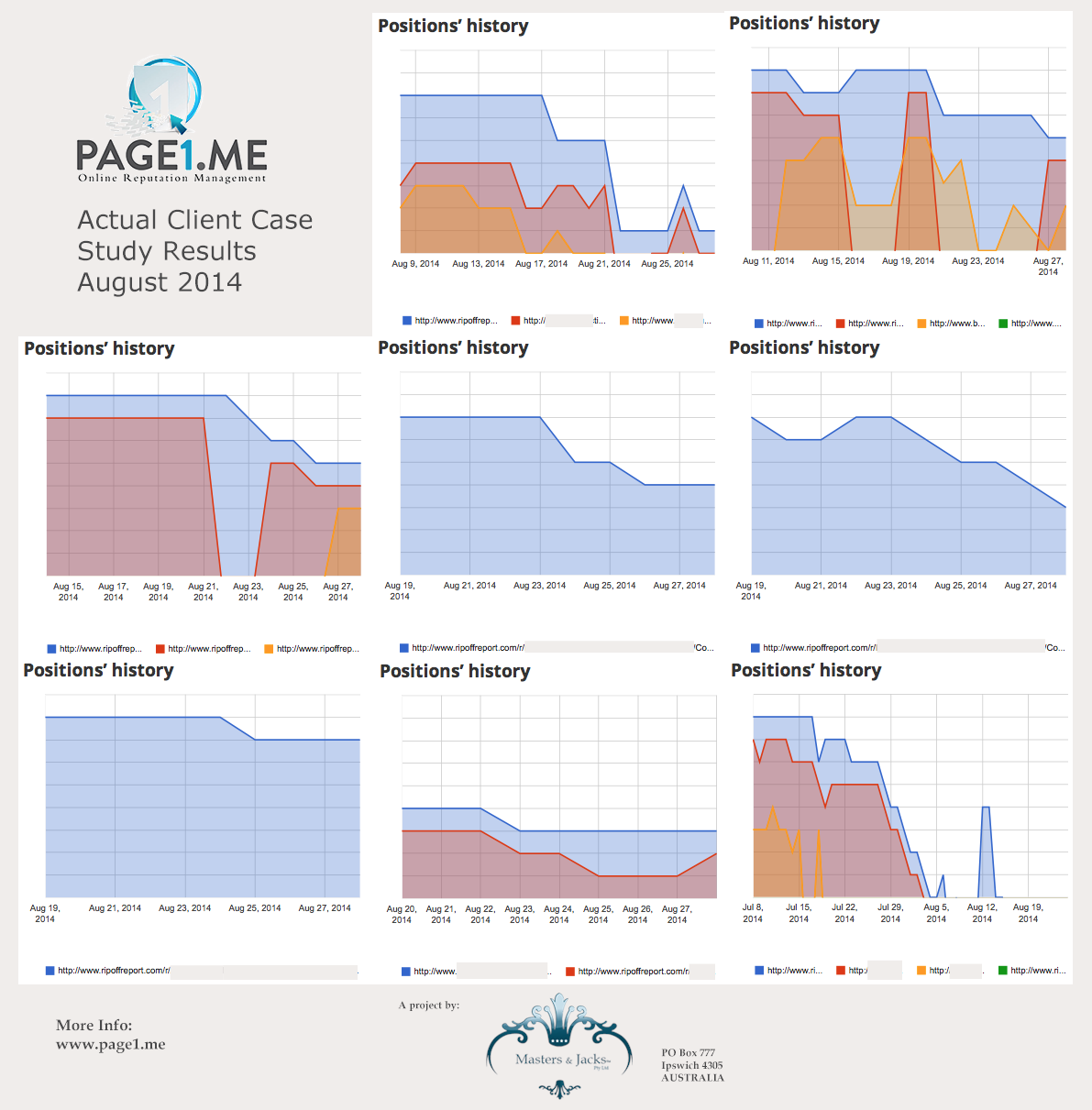 Posted by Michael Roberts Internet Libel Litigation Consultant at 6:33 AM No comments: 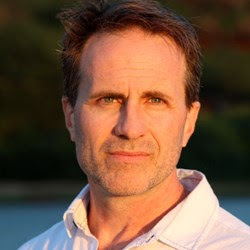 We have found that law enforcement and private investigation agencies are often frustrated by sophisticated attempts by their targets to obfuscate their location.

Traditional 'Skip Tracing' services are provided by Private investigators around the world. This is where they attempt to physically locate deadbeat parents who are avoiding paying child support or refusing visitation to the other parent. Often these attempts to locate the elusive parents are frustrated by sophisticated attempts by the parents to live anonymously.

The advent of modern communications, including the Internet and mobile phones, provide new methods of locating these individuals. Effective immediately, old-fashioned private investigators that do not possess digital forensics skills have a new weapon in their skip tracing arsenal.

Rexxfield.com's founder Michael Roberts, is a licensed private investigator specializing in electronic surveillance, forensics and geolocation. Mr. Roberts announced today that Rexxfield is opening up its "box of toys" and making their services available to licensed private investigators globally. He said, "until recently some of these services were reserved exclusively for government or law enforcement agencies". 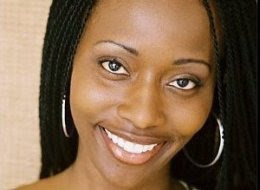 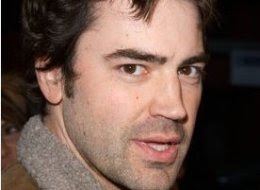 In many cases horrible problems have been avoided for the community as a result of anonymous blogging. This includes whistle blowing for white-collar criminals, community awareness when sexual predators move into the neighborhood, and many other alerts that are of great community benefit.

Benefits notwithstanding, you can't make an omelette without breaking eggs and anonymous free speech on the Internet is one such omelette. There is no such thing as free speech; there is always a cost. Sometimes that cost is acceptable, moreover desirable, particularly in the case of positive community awareness. However, often their many false and deceptive rumors, and libelous attacks are motivated only by hatred and vindictive antisocial promptings. More often than not, these serial cyber defamers have some type of antisocial personality disorder. They have nothing better to do than hurt other people; in fact they are actually fueled by other people's pain. Normal people like 97% of the readers of my comment cannot begin to relate to how these people think. Stop for a moment and imagine not having a conscience­..... it is simply impossible.

A concerted, focused and malicious Internet smear campaign can be as devastating for a person that relies on his or her reputation for employment as a fire can be for a farmer who loses his fields, barns, and livestock.

www.Rexxfield.com
Read the Article at HuffingtonPost

In a perfect world free speech would work, but so would communism.....

There is no such thing as free speech unless someone is discussing the weather. Good things are free yes, but good things are invariably abused. Free speech is abused, and this results in a cost to someone, namely the libel victim. Congressional immunity for republishing libel online (particularly with foreknowledge) is absurd. Newspapers, magazines, TV stations and radio can't, and their exposure is only momentary... why can online content providers when their content is immediately and perpetually available?. Adherents and practitioners of this silly safe-harbor are either lazy, ambivalent, anti-social or haven't yet experience the anguish of being on the receiving end.

In a perfect world free speech would work, but so would communism.....

The US First Amendment makes it very clear that anonymous criticism and civil dissent is a privileged (protected) form of free speech. Notwithstanding, it is not absolute; if an anonymous author publishes statements of fact that are deceptive by error (without malice) or maliciously deceptive, the veil of anonymity can be pierced and rightly so.

The suggestion of cart blanche and absolute protection of all anonymous speech under the guise of "net neutrality", justified, malicious or otherwise is absurd. It is reasonably presumed that proponents of such notions have never experienced the financial and emotional debilitation of these vicious assaults. The recent advent of anonymous online character defamation mediums compound the victims' carnage exponentially due to the enduring nature of the postings, instant availability through search engines, and the viral republication thereof.

How to Identify Anonymous Bloggers who Defame You (and seek damages)